Rejuvelift is a good option for the vast majority of patients considering facelift surgery. Learn more about the technique from Dr. Cutolo by requesting a complimentary consultation using the online form, or call our office at  (718) 720-9400. 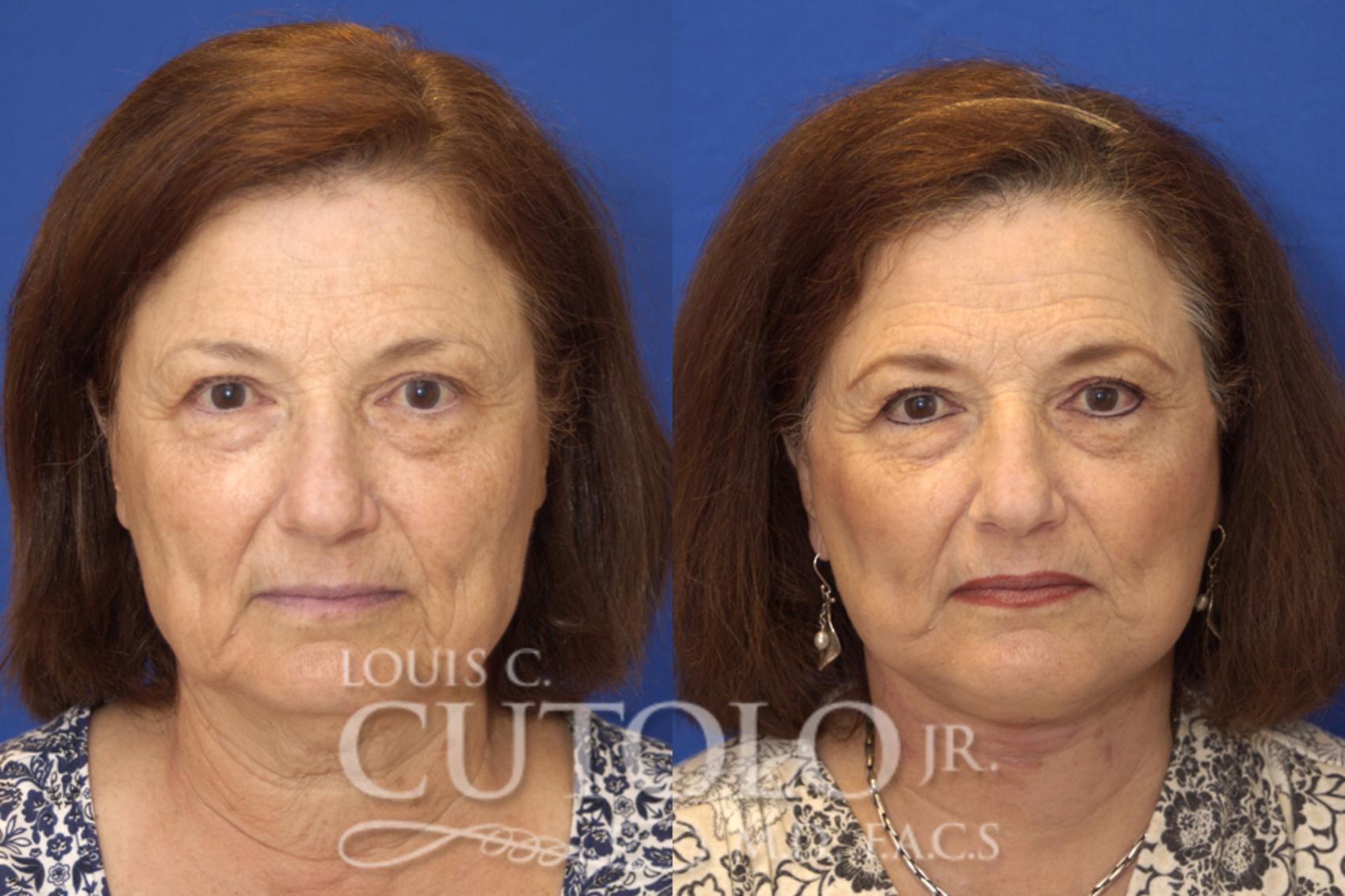 This is a 69-year-old female who disliked the jowling that was happening as she aged. She also wanted to reduce the excess skin in her neck . She was looking to achieve a more youthful appearance by improving the sagging neck and jowls. In order to achieve her goals, a Rejuvelift was performed in the office under local anesthesia with oral se... Read More 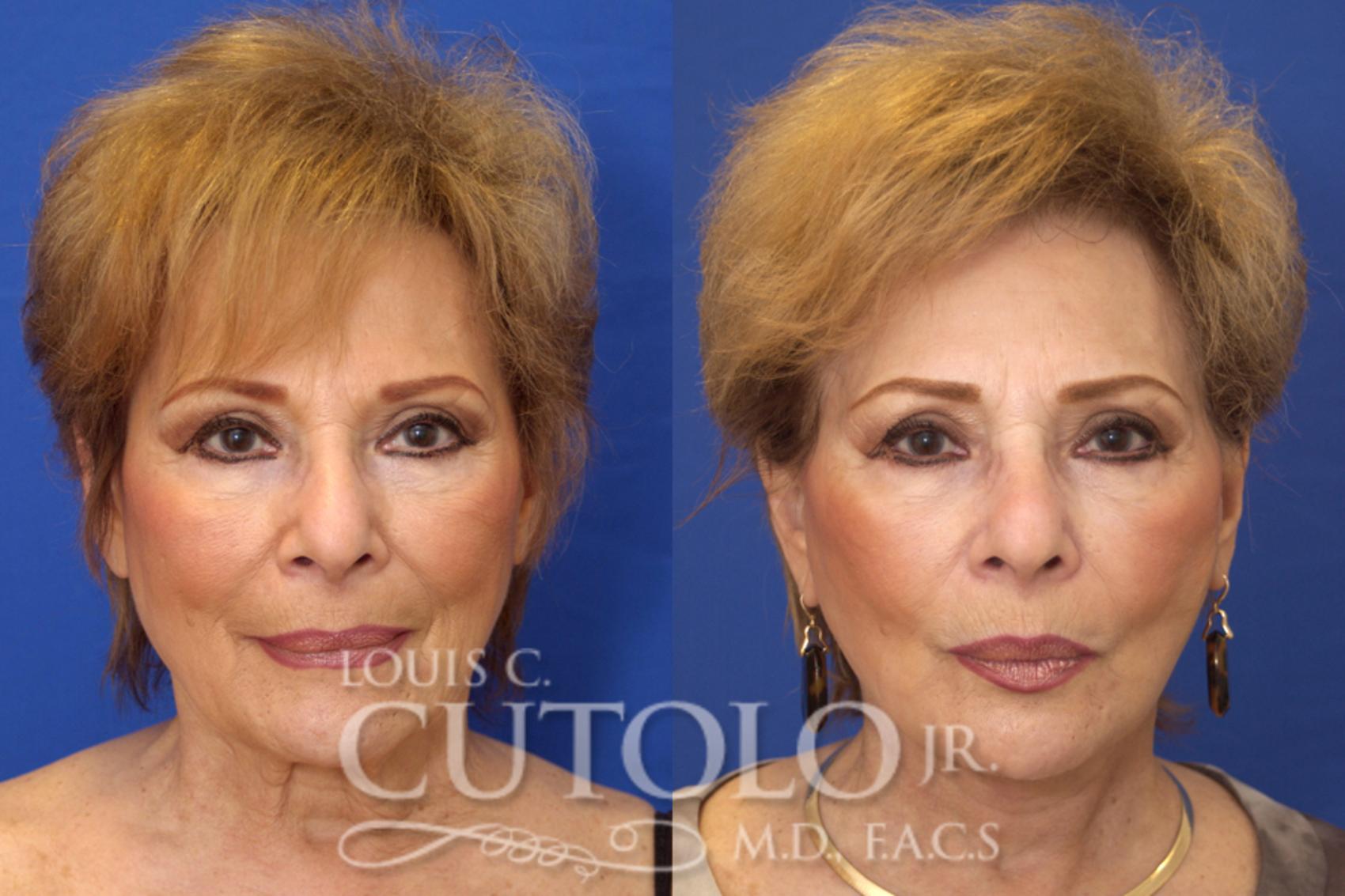 This is a 74-year-old female who disliked the excess skin that developed in her neck and disliked the jowls that were forming as she aged. She wanted to achieve a more youthful appearance by improving the sagging neck and jowls. A Rejuvelift was performed in the office under local anesthesia with oral sedation. This included liposuction and t... Read More
Before & After
Case: 3 of 8

This is a 69 year old woman who disliked the fact that she had developed jowls and a sagging neck.  She also thought that the excess skin in her upper eyelids and the "bags" in her lower eyelids made her look tired.  She wanted to undergo facial rejuvenation in order to look younger and appear less tired. After... Read More
Before & After
Case: 4 of 8

This is a 58 year old woman who thought that she was aging faster than her age would otherwise suggest.  She disliked the jowls that were present as well as the skin that was starting to sag in her neck.  She wanted to refresh her look so that it matched her youthful personality and zest! After a thorough consultation wi... Read More
Before & After
Case: 5 of 8

This is a 56 year old female who wanted to obtain a more youthful appearance.  She thought that her upper and lower facial areas were making her appear older than she felt.  She disliked the excess skin and excess in her upper eyelid brow as well as the puffiness of her lower eyelids. She also did not like the recent appearance of j... Read More
Before & After
Case: 6 of 8

This is a 59 year old female who disliked the excess skin that she developed in her neck and jawline.  She said that she thought that she appeared older than she actually felt.  She wanted a more youthful and refreshed look....more in keeping with your youthful demeanor!After a careful discussion, she decided to undergo a Rej... Read More
Before & After
Case: 7 of 8

This is a 61 year old female who wanted to improve her appearance.  She thought that the sagging skin in her neck and jowl region made her appear older and tired...certainly not matching her youthful spirit and energy!  She wanted a refreshed look that would look natural!She came to the office to discuss her options and ultim... Read More
Before & After
Case: 8 of 8

This is a 61 year old female who desired to return to a more youthful look - she wanted to reduce the jowls and tighten her neck!  She also thought that she was losing volume in her cheeks as well and this was contributing to the appearance that she disliked.   After a careful evaluation, it was decided that she would un... Read More

Keep in mind that each patient is unique and your results may vary.

Dr. Cutolo developed the Rejuvelift technique to provide people who are looking for a less-invasive facelift alternative with a procedure that addressed their aesthetic concerns without requiring such a lengthy recovery. The benefits of choosing Rejuvelift:

In certain cases, a traditional facelift may still be the best option. Dr. Cutolo recommends what he believes is the best approach for you following a personal consultation.

“It’s so gratifying to see patients within a week of Rejuvelift surgery and seeing how happy they are with the results — and that they’re already going out to dinner and meeting with friends.”
Dr. Cutolo

Who Is a Good Candidate for a Minimally Invasive Facelift?

Good candidates for Rejuvelift are people who are in good physical and mental health. The Rejuvelift procedure focuses on the lower third of the face, making it especially popular with people who wish to correct sagging jowls, wrinkles, and excess skin around the chin and neck while improving the jawline.

To maximize their results, some patients choose to combine a Rejuvelift procedure in conjunction with non-surgical options such as BOTOX® Cosmetic, dermal fillers, or fat injections. Because Rejuvelift focuses on the lower third of the face, these other procedures can help enhance areas of the upper two-thirds of the face that may only need small corrections.

During the procedure, Dr. Cutolo removes excess skin and fat in the lower face, smoothing lines and tightening the jawline. Most Rejuvelift procedures last between 1½ and 2 hours.

Because general anesthesia isn’t administered, patients are able to return home as soon as the procedure is completed.

Because Rejuvelift is less involved than a traditional facelift, Brooklyn, Queens, New York City, and Staten Island patients find that the recovery is a bit easier. For most patients, the recovery process takes about 10 days, at which time they are able to return to most of their normal activities.

Patients are scheduled for a follow-up appointment the next day and then 1 week later for suture removal. 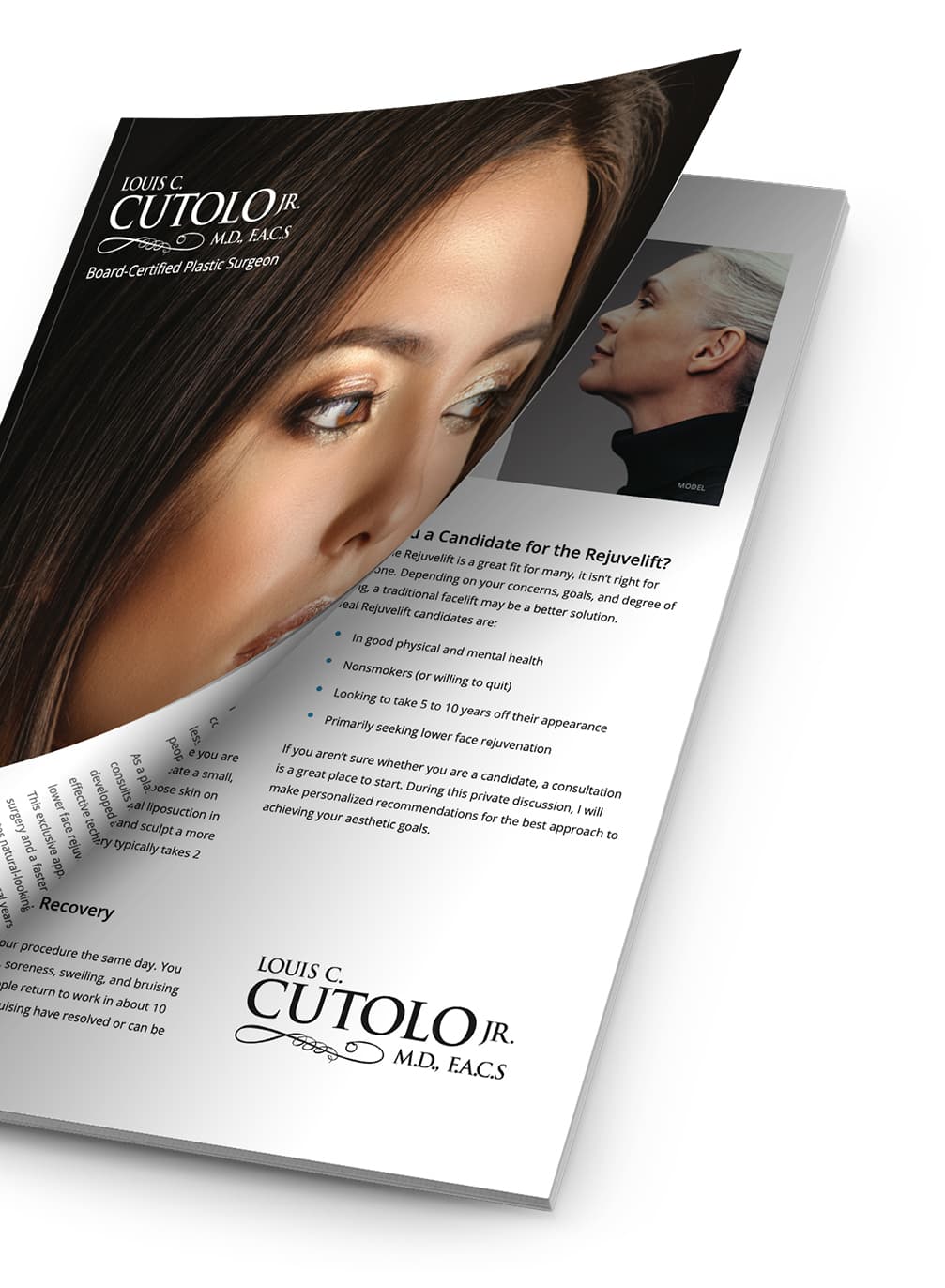 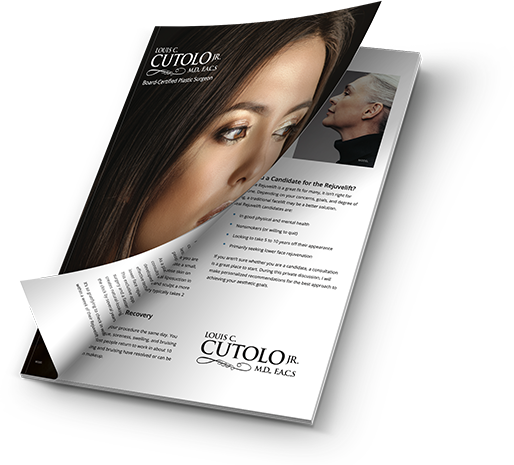 Patients who have undergone Rejuvelift procedures often remark that they feel their faces finally match how they feel inside — an invaluable benefit of any cosmetic procedure. Though no facelift can halt the aging process, the results of a Rejuvelift procedure can be enjoyed for years, and you’ll continue to “beat the clock” as you age.

A Reputation Built on Results

First let’s start with the girls in the office very nice and respectful. Rose always made sure to call...
Nov 23, 2022

Google
The atmosphere was very tranquil at Dr. Cutolo’s office. Feeling that sense of serenity helped me greatly...
Nov 08, 2022

Google
I highly recommend Dr. Cutolo ! Trust him ! After having a procedure I was amazed how the dr really...
Sep 07, 2022

Google
I went for a consultation with Dr Cutolo for dark and sunken eye hollows, as well as nasolabial folds...
Sep 06, 2022

What is the cost of a Rejuvelift procedure?

The price of any cosmetic surgery procedure varies from patient to patient and is based on several factors. Those include the specific needs of the patient and the extent of the surgery.

Rejuvelift costs less than traditional facelift, in part because the procedure uses a local anesthetic with sedation, instead of general anesthesia. We will quote a specific price for your procedure after the consultation.

Can I combine Rejuvelift with other procedures?

Yes. Because signs of aging typically occur in all areas of the face, they may be more pronounced in certain areas, such as the neck and jawline. Fine lines, wrinkles around the eyes, and lost volume in the midface can be addressed either surgically or nonsurgically as a complement to your Rejuvelift procedure.

For example, BOTOX and dermal filler injections can enhance the surgical rejuvenation offered by Rejuvelift in the lower third of the face. Or you may elect to combine eyelid surgery with Rejuvelift. Dr. Cutolo creates a specific treatment plan based on your consultation.